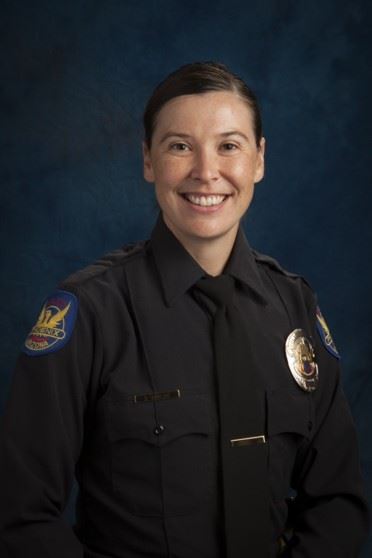 When she transferred to Phoenix and was assigned to the downtown area. She obtained her CIT certification and volunteered to work on outreach teams with various organizations to officer services to the homeless.

In 2015 she tested for the department’s new CIT squad and was a standout over the highly qualified field, scoring highest out of more than 40 applicants. In 2016 she took over as the CIT Training coordinator (for the greater Phoenix area) and liaison to the mental health community. Sabrina’s goal as the CIT Training Coordinator is the same as that of her department and the community members she partners with: to support the principals of CIT in preparing Officers to properly engage with the vulnerable seriously mentally ill population. This is done through a combination of maintaining strong relationships and training of both officers and community members. Sabrina facilitates 4 CIT classes a year for officers from various departments as well as 2 continuing education courses and numerous department trainings for her fellow Phoenix Officers (and officers across the State). She also runs several trainings for behavioral health personnel and family members on police culture (so that the community can better understand Officers who serve them) and what to expect if you call 911.

A thriving CIT program can be seen by the increase in the number of individuals officers help by diverting them into the behavioral health system rather than to jails or emergency rooms. The success of this partnership can be seen in statistics: Officers in Maricopa County divert over 21,000 individuals a year away from emergency rooms & jail, and toward mental health providers who can properly address delicate mental health issues. Phoenix Police alone are responsible for more than half of these diversions.